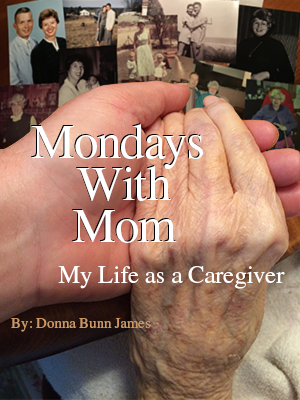 On Tuesday of last week, Mom had her last food. She had been totally uninterested in food since becoming bedridden and Laverne was able to get a protein drink and two yogurts in her for breakfast. That night, she didn’t want to take her medicine mixed in another drink. I managed to siphon a few dribbles from a straw, but that was all.

On Wednesday, she ran a fever. April from Hospice had come out to give Mom a bath, but decided against it. We called Matthew.

When Mom went on hospice five years ago, Matthew was our nurse. Mom crushed on him pretty hard and it was always so cute to watch her light up when he entered the room. (See the article I wrote about him.) I think she missed him when she “graduated” from hospice. Although Matthew has now been promoted to office staff, when Mom went back on hospice in December, he asked to have her assigned to his load. Once again, he’s been precious to us.

Matthew came out and gave us courage for the days ahead. He suggested we begin to call in the family and begin preparing for the end.  By then, Mom had not eaten, had her eyes closed, and was drifting away. I called off my responsibilities for that afternoon and both of my brothers came in. Alan stayed the evening and John could only stay overnight since they both had jobs to do over the weekend.

On Thursday, Amy tried to feed her yogurt, but Mom still had no interest in food. When Matthew came in, he recommended giving her anti-anxiety meds to keep her calm since she’d not had her regular meds since Monday. Keeping the meds in her system would help keep her calm even when her breathing became labored.

She’d had a few sips of water on a sponge on Wednesday and Thursday, but by Friday was having difficulty swallowing. My sister and brother-in-law came in just after lunch. Mom’s eyes stayed closed but seemed to respond with hand squeezes and small changes in respiration. Dad was convinced that she was still reacting to his touch and snuggles.

On Saturday, there had been few discernable changes. The weekend nurse, Gina, had a hard talk with Dad. Carla and I were so grateful. It’s been a very hard transition for Dad, of course. Gina was great, plain and honest. She also encouraged us to start the morphine along with the anti-anxiety meds to keep her pain-free.

Gina came again on Sunday and was once again very encouraging and helpful. Alan came back and said Mom had changed much since Wednesday. I didn’t see it since I had been with her every day. I suppose she was changing in tiny ways each hour. She was resting comfortably thanks to the “cocktail” Carla and I prepared. We swabbed her mouth with water and she would close her lips as if to drink.

Sleeping next to her on Saturday and Sunday nights, I slept fitfully. I felt like the nights I first brought my newborns home. I was listening for changes in breathing. On Sunday night, Mom’s breathing became more labored. After a call to Gina, Carla and I began a regime of morphine every two hours. I set an alarm but barely dozed in between. At 4:00, I gave her a dose and dabbed her mouth with water. By then she was breathing 4 or 5 times with a lapse of time without an intake of air. I counted the seconds of no breathing…15 seconds…22 seconds…38. Then her last. I counted three minutes and looked at the clock: 4:30.

Mom was home. She was free of dementia and the broken arm and crippled body. According to 2 Corinthians 5:8, since she was away from her body, she was at home with the Lord. I am sure she was hearing, “Well done, my good and faithful servant.”

Mom’s funeral will be at 11:00 on Thursday, Feb. 20 at Hillside Funeral Home in Clarkesville. Visitation will be at 9:30 that morning with burial at Bethlehem Baptist Church cemetery. 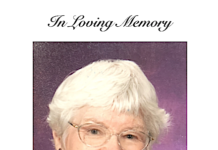