Twenty-two years ago, when Susan and Herb Lamb relocated to Cleveland, Georgia, Susan dreamed of starting a lavender farm on their property. She researched growing lavender. She delved into information on how to use lavender in recipes and products. She was excited about the possibilities.

However, everyone she talked to locally gave her little hope. Susan explains, “People kept telling me that what I wanted to do just couldn’t be done in White County.”

The dream of a lavender farm

To be honest, the advice Susan received was generally correct. Lavender grows best in arid, non-humid areas, like the south of France – definitely not how anyone would describe the weather in the Northeast Georgia mountains. In fact, lavender is prone to develop root rot in areas with too much rain or where the soil does not drain well.

Despite the advice she kept hearing, Susan pushed on, gathering recipes and thinking about how to plant lavender on her property.

Sixteen years later, Susan heard about the Roswell Lavender Festival in Roswell, Georgia. Thrilled with the opportunity to talk to real, live, lavender growers, Susan set off, gently dragging her husband and two friends with her. She even planned to take a class to learn to make lavender wands, a labor intensive project that would be great to sell in the shop she wanted to open.

Things didn’t work out as Susan had hoped. The class was full and Susan couldn’t get in it. Foods that used lavender had been made to sample, but the crowds at the festival had devoured everything in sight. Susan wasn’t able to taste anything, not even the lavender lemonade.

Susan left the conference having tried nothing. But she was thrilled with the knowledge that a lot of people were as interested in lavender as she was.

The very next year, Susan put 500 lavender plants in the ground. Three hundred plants didn’t survive. Susan realized she still had a lot to learn about growing lavender.

For the past five years, Susan has continued to work her lavender farm. She experiments with soil types and drainage. She constantly adds new lavender varieties to her planting beds. She’s developed relationships with other lavender growers in Georgia and throughout the U.S. through the United Stated Lavender Growers Association.

Susan has settled on working with a maximum of 350 plants at any time. “Growing lavender is a lot of work,” she says. “Planting, pruning, weeding, harvesting – it all takes a lot of time. 350 plants is the most I can handle.”

Today, Susan’s lavender plants thrive in beds that are angled across the hill to allow rain water to run off. Grasses and weeds allowed to grow between the lavender also help control the ground water run off. She now can manage her lavender beds successfully, controlling the amount of water the beds receive and protecting the individual plants from root rot.

Interestingly, lavender can only be harvested during a three-week period in the spring, usually mid-May. The trick is to harvest the lavender stems before all the blooms open. That allows the blooms to keep their sweet aroma when the stems are dried. And the aroma will last forever.

This Saturday, June 26th, is the last chance to try your hand at harvesting lavender at Susan Lamb’s farm on this year’s crop. The farm is open from 11 am – 4 pm on Saturdays until the end of November.

The Lavender Shoppe on site is also with a variety of products produced at the farm. And, Susan usually has lavender lemonade available to sample.

Susan is personally interested in the culinary use of the lavender. In normal years, meaning without COVID restrictions, Susan has held open house events. “I love introducing people to how lavender can be used in cooking. In the past, I’ve done huge spreads of food and people get to try it all. With COVID, we just haven’t been able to do that.”

Visiting the farm at other times can be arranged through appointments. Susan has hosted special events such as bridesmaids luncheons and mother/daughter teas. Classes for making lavender wreaths and bouquets are also offered occasionally. Information on upcoming classes is on their website.

Lavender Lamb Farm is one of over 650 lavender growers in the United States and is a member of the American Lavender Growers Association. The farm is located at 176 Bugle Drive, Cleveland, Georgia, 30528. Susan can be reached through the website or at 706-865-0510. 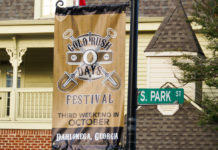 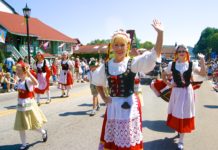 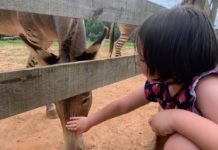 Chestatee Wildlife Preserve has zedonks, tigers, and bears – oh my! 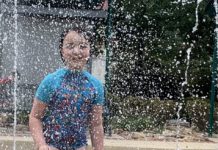 Splash through the end of summer 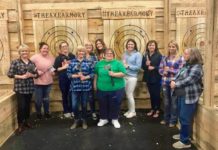 The urban sport of axe throwing