(GA Recorder) — One year after George Floyd’s killing by a Minneapolis police officer, protesters took to the streets of Atlanta and Floyd’s family traveled to Washington D.C., where lawmakers have been attempting to craft a bipartisan bill to overhaul the nation’s policing laws.

Congress failed to act by the anniversary of Floyd’s death Tuesday — the deadline that President Joe Biden had urged lawmakers to meet.

Instead of signing legislation named for Floyd into law on Tuesday, the president met with Floyd’s family members in a private gathering at the White House.

Afterward, Biden said in a statement that he appreciates the “good-faith efforts” from lawmakers of both parties to pass “a meaningful bill,” and that he hopes they will get a measure to his desk quickly.

“We have to act. We face an inflection point,” said Biden, who met with Floyd’s family shortly after his killing last year and has spoken with them by phone several times. “The battle for the soul of America has been a constant push and pull between the American ideal that we’re all created equal and the harsh reality that racism has long torn us apart.”

Demonstrators at the Atlanta rally shared the same sentiment. Family members of Georgians killed by police waved signs with their loved ones’ faces and called for justice.

Attorney Hahnah Williams spoke of her brother Matthew Zadok Williams, who was shot by a DeKalb law enforcement officer in his home after a neighbor called police on him. The pain she feels is all too common, she said.

“My family has been blessed because we were able to see some bodycam footage,” she said. “I can’t imagine going through this and not being able to see my brother’s final moments, so I want to acknowledge all the families who were not able to see that. This has been hell.”

Tammy Featherstone is a co-founder of Georgia Moms United, a support group for mothers of Georgians killed by police. The group has 13 members from across the state, she said.

“We do a lot of crying,” she said. “People don’t understand that when you lose a child, it is hard, and to lose it to the ones that are supposed to protect and serve makes it even harder. And it’s happening every day, every single day.”

Police in Georgia killed 309 people between 2013 and 2020, 121 of whom were Black, according to Mapping Police Violence.

Atlanta rapper and activist Clifford “T.I.” Harris was one of the sponsors of the protest. He told the families that the community is united behind them.

“I want all of these families to know that our loved ones have not perished in vain because they have ignited a spark that will continue to be fed by all of us,” he said. “With all of our efforts, the flame will be fed, and we will receive justice, one way or another.”

George Floyd was killed at age 46 May 25, 2020, after former Minneapolis police officer Derek Chauvin pressed his knee onto Floyd’s neck for more than nine minutes outside a convenience store. Floyd’s murder sparked an emotional outcry across the country, with protesters filling the streets as they called for legal changes to policing.

Tuesday’s protest was peaceful. Two children, 8-year-old Nevaeh and 3-year-old Kawan, charmed demonstrators by zooming through downtown Atlanta ahead of the crowd on tiny go-karts.

“I know that it’s wrong to kill Black people for no reason,” she said. “I think we should come out here to make a change, a change to keep all Black lives safe.”

Grandfather Alfonzo Ward said he wishes his grandchildren didn’t have to learn about those violent cases, but he hopes the protests will help make them safer in the long run.

But the broader policy changes they’ve urged have not yet come to fruition.

The Democratic-controlled House has passed a measure known as the George Floyd Justice in Policing Act, which would ban the use of chokeholds and make it easier to prosecute officers for wrongdoing. But that bill has not secured enough Republican support in the Senate.

Instead, a group of Democrats and Republicans from both chambers are attempting to hammer out a deal. That group has included Republican Reps. Brian Fitzpatrick, of Pennsylvania, and Pete Stauber, of Minnesota.

One remaining obstacle in negotiations over a policing reform bill is a provision that would limit legal protections known as “qualified immunity” that protect police officers in civil lawsuits.

Earlier in the day, the group of family members — which included Floyd’s daughter, Gianna; her mom, Roxie Washington; and several of his brothers — also gathered with House Speaker Nancy Pelosi, (D-Calif.), on Capitol Hill.

During a news conference, Pelosi noted that the family had been to the Capitol when the House was passing its measure, and she repeated an often-cited quote from Gianna that her father “will change the world.” 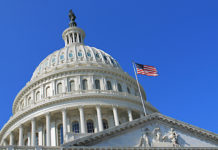 Georgia election board dismisses claims of ‘ballot harvesting’ in 2020 election

U.S. House to vote on $28 million for FDA to relieve infant formula shortage