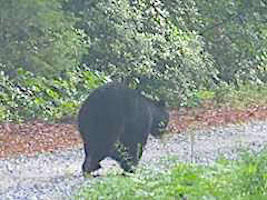 Summer is being replaced by autumn and the foliage will now change into bright autumn colors. As a young man when I left home to serve in the Air Force for 22 years, I had fits of homesickness thinking of the Blue Ridge Mountains in full colors in comparison to the drab and barren looking hills of Korea. I plan during the next few weeks to ride or walk side roads and trails in Habersham and also Rabun County and perhaps go over towards Cleveland and beyond.

Colors will change first on the highest slopes and further north one travels the earlier the change occurs. In the high valley called Germany Valley where I grew up on a farm the change of season began roughly two weeks earlier than in Clayton. The changes vary in time and vividness according to weather conditions and temperatures.

Last fall I took a ride from Clarkesville going up Old 441 highway and turned left up the mountains by the old hotel to cross into Rabun County by the gravel road that winds a crooked way over the divide and by the lakes in Rabun County. One time, hunting above the old hotel one time I found a “bear tree.” It was a large dead tree with many scrapes on its side where a bear climbed to crawl into a big hole near the broken off top.

I used to hunt deer, grouse and squirrels all along the road into Rabun County. I once found a bear spending the winter in a hollowed out hole under a large fallen tree. I could see part of its black fur under the log as I walked by.

More bears are around now. I’ve seen two or three over the past few months walking trails beyond the “Goat Farm” not far from Panther Creek. I have walked down a steep trail to fish Panther Creek near the “Falls.” One day about six months ago I met a bear on the dirt road and climbed up the bank. As the bear walked by below me I took its photo. Once, sitting against a tree resting, a big bear came out of some bushes and walked by within a few feet. It never seemed to notice me but I’m sure it saw me but was not afraid or mad either, and merely didn’t want to stop for a chat.

Once while wading and fishing with a fly rod in a creek near Helen, Georgia, a big black bear stalked out of the trees just a few feet above where I stood. It stopped in the creek and took a long, slow drink, and then – still ignoring me – stalked on out of the stream and into the woods. I figure a bear that ignores you just wants to go about its business and does not have time to chat. Let us cross over the river now and see what is on the other side. 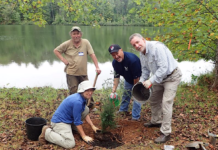