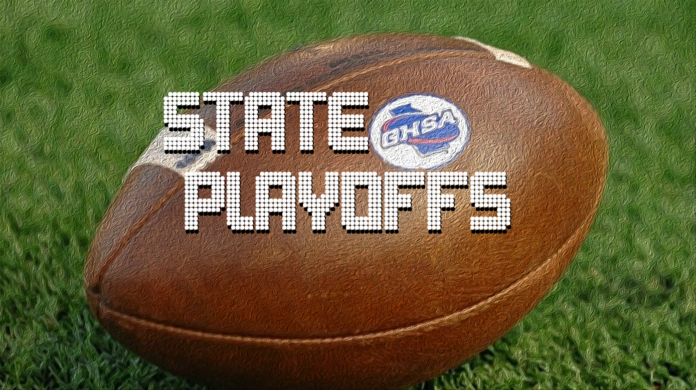 Here’s a preview of Northeast Georgia area teams still in the hunt for a championship title. The quarterfinals of the GHSA State Football Championships kick off Friday. Check out Now Hab’s NEGA Area Scoreboard on our sports page for updates.

Class 5A
Calhoun (10-2) at Clarke Central (10-2): This is a rematch of a 2020 second-round game, also played in Athens, that Calhoun won 33-14. Calhoun’s Christian Lewis passed for 217 yards and three touchdowns in that game. Now a senior, he was at his best last week, completing 29 of 50 passes for 447 yards and three touchdowns in a 49-42 victory over Ware County. Wide receivers Cole Speer (10-201-1) and Quin Smith (6-117-1) gave the Gators fits. Another Calhoun win would put the Yellow Jackets in the semifinals for the first time under Clay Stephenson, who became coach in 2019, or since they moved out of Class 3A. Clarke Central has won nine straight after an 0-2 start (lost to Buford and Oconee County) and is in the quarterfinals for the third time in four seasons. Clarke’s most recent semifinal was in 2009. This Clarke team, which throws for only 74.4 yard per game, is far more run-oriented than recent ones. In the second round, William Richardson rushed for a career-high 205 yards and three touchdowns in a 24-7 victory over Starr’s Mill. He has 930 yards rushing on the season.

Class 4A
North Oconee (9-3) at Bainbridge (9-3): Both teams were 1-3 after the fifth week of the regular season, but they come into this week’s game as region champions with eight-game winning streaks. North Oconee has held six of eight opponents in the streak to a touchdown or less, including Spalding in a 37-0 victory last week. Khalil Barnes scored on a 53-yard pass on the first play from scrimmage, and the Titans led 23-0 at halftime. Rodrick Finch and Dominic Elder added rushing touchdowns in the second half. Bainbridge had 436 yards of total offense in a 48-7 second-round victory over Northwest Whitfield. Kennan Phillips ran for 136 yards and two touchdowns, and Bo Smith was 11-of-17 passing for 255 yards and three scores. Phillips has rushed for 687 yards and Smith has passed for 1,970 yards this season. Bainbridge limited Northwest Whitfield to minus-4 yards rushing on 20 carries and 242 total yards. The Bearcats have held five of eight opponents to eight points or less during their winning streak. Bainbridge is in the quarterfinals for the third time in four seasons. North Oconee is making its first appearance since 2014.

Class 2A
Rabun County (11-1) at Thomasville (11-1): This game matches the two top-rated teams in Class 2A (No. 1 Rabun County, No. 2 Thomasville). These schools, located 325 miles apart in opposite corners of the state, have met just once in football, a 38-24 victory by Thomasville at home in the 2019 quarterfinals. Rabun County is in the quarterfinals for the seventh consecutive season but still seeking its first state title. The star of the show for the Wildcats is four-star QB Gunner Stockton (committed to Georgia), who threw for 444 yards and five touchdowns and rushed for 60 yards and three TDs in a 56-7 victory last week against Jeff Davis, which had given up just 54 points all season. Stockton, who has 53 TD passes this season and just one interception, has 13,492 career passing yards and needs 411 more to break Trevor Lawrence’s state record of 13,902. Thomasville, in its fourth quarterfinal in five seasons, advanced with a 42-16 victory over Heard County last week. Shannen White was 8-of-10 passing for a season-high 252 yards and four TDs, giving him 1,595 yards and 19 TDs for the season. Ricky Fulton rushed for 59 yards and has 766 for the year. Malik Harper leads the Bulldogs in rushing with 1,051 yards and 19 TDs.

Class A Private
Prince Avenue Christian (11-1) at First Presbyterian (10-2): Third-ranked Prince Avenue Christian, the defending state champion, is in the quarterfinals for the 10th time in 11 seasons. Aaron Philo was 21-of-25 passing for 368 yards and four touchdowns in a 52-0 victory over Brookstone last week. The sophomore has thrown for 3,422 yards for the season, second only to Rabun County’s Gunner Stockton. Bailey Stockton had five receptions for 146 yards, putting him at 1,080 for year. He caught two touchdown passes and scored on a 45-yard interception return. The Wolverines held Brookstone to 52 total yards on 38 plays. No. 9 First Presbyterian defeated Mount Vernon 31-0 last week to reach the quarterfinals for the first time since 2012. Griffin Green ran for 97 yards and two touchdowns, putting him at 1,100 yards for the year. Jackson Moore scored on a 22-yard reverse and a 68-yard pass from Jakhari Williams, who passed for 142 yards. Williams, also a sophomore, has thrown for 1,700 yards this season. Prince Avenue won the two previous meetings, beating First Presbyterian in first-round games in 2014 and 2015.