A former prison guard at Lee Arrendale State Prison in Alto is in jail charged with sexually assaulting an inmate.

Ann Marie Johnson of Alto was arrrested and booked in the Habersham County Detention Center on Dec. 16. Johnson worked as a correctional officer at the all women’s state prison. The alleged assault took place on Nov. 17 and on one other occasion.

Georgia Department of Corrections spokeswoman Gwendolyn Hogan confirms the arrest but is releasing few other details because the case is still being investigated.”We can confirm that Officer Ann Marie Johnson was arrested and has been terminated,” Hogan says.

Johnson is formally charged with sexual assault on a person in custody and violation of oath of a public officer.

And the winner is…

Enter and vote in our annual HABoween Costume Contest

Laughter and the cancer connection 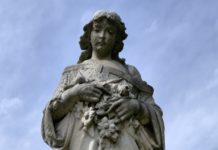