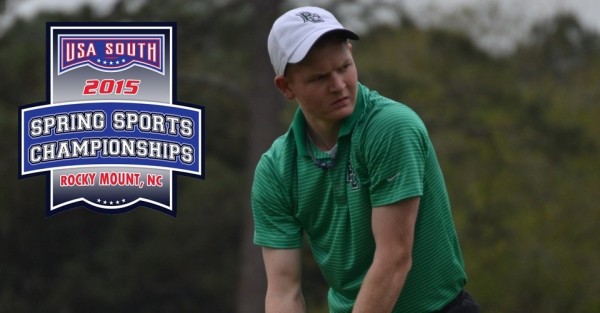 Rocky Mount, NC – The Piedmont College men’s golf team finished in 9th of nine teams at the USA South Championship Tournament today in the Lions’ first-ever appearance in the postseason event.  The Lions top finisher in the event was USA South Rookie of the Year Sam Hill who finished tied for 27th.

Entering the day, the first nine holes of the third round had been played Saturday due to impending weather entering North Carolina, so the final nine were played Sunday.

LaGrange won the USA South tournament title with an impressive three round 871 with Cory Howard taking the individual title with a 210 combined score shooting a 69, 70, 71. Howard took the lead in the opening round and never looked back.

Hill finished with a three round score of 235 with an 81 in the final round. Just behind him was Joseph Morris who was a single stroke behind him in the overall total with a 236 and shot an 81 on Sunday.

Jake Forbes ended the tourney with his best round shooting a 78 to end in 33rd with a 239. Rounding out the top five were Aaron VanKempen and Davis Cook who shot an 80 and 87 in the final round respectively. With the completion of the tournament, the Lions conclude the 2014-15 season.