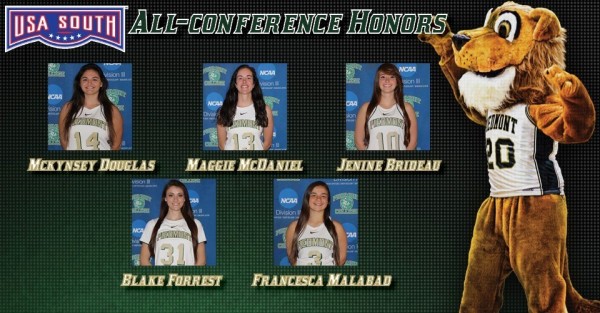 Fayetteville, N.C. – The Lady Lions 13-1 season has been filled with accolades including the best season in program history and to top off the regular season honors, Piedmont saw five athletes earn USA South all-conference nods. There were four first-team selections for Piedmont, marking the most of any team in the conference.

The Lady Lions were the only team to place a member in each the attack, midfield, defense and goalkeeper category in the all-conference teams.

At attack for the Lady Lions, McKynsey Douglas earned first team all-conference honors for the second straight season as she led the program with 56 goals in 2015. Douglas has led the team in goals scored each season she has been with the Lady Lions and scored at least once in every contest of her career.

The junior scored a season-high and career-high seven goals against Birmingham-Southern and scored five or more on six other occasions. Douglas finished fourth in the league in goals scored and in the top five in points this season and earned USA South Player of the Week once this season.

The leader in assists for the Lady Lions earned herself a spot on the first team all-conference list for the midfield as Maggie McDaniel made the cut in what comes as no surprise. McDaniel tallied a USA South best 45 assists this season along with 41 goals making her the only 40 assists/40 goals athlete in the conference.

Brideau has started all but one contest during her two seasons with Piedmont with 30 starts in her career. She has continually increased her impact on the team moving from outside the top five in caused turnovers and just making the cut in the top 10 in ground balls during the 2014 season to top three in both categories this season.

Posting possibly the best season across the USA South in the cage, Blake Forrest was a near shoe-in for the first-team goalkeeper. Forrest finished as the conference’s leader in save percentage (50.0), goals against (84), and goals against average (6.46).

The sophomore’s record at goalkeeper is a remarkable one as she made her first collegiate start to open the season against Hendrix College and posts a 12-1 career record in the goal. She helped her team to a shutout against Hanover College and held opponents under five goals six times this year. Forrest earned a total of five Defensive Player of the Week nods throughout the season.

The only freshman making the cut for the Lady Lions was Francesca Malabad who has been known for her speed and agility earning her second team all-conference honors on defense. Malabad comes in at just 4’11” but her ability to get low led her to a second-best finish on the team in ground balls (32) and caused turnovers (25).

Piedmont enters the USA South postseason as the #1 overall seed and will play 4th seeded Ferrum College on Friday, April 17 at 1:00 pm in one of two semifinal matchups that day. On the other side of the semis is the #2 seed Meredith and #3 seed Greensboro who will play for the remaining spot in the USA South Championship Game set for Saturday, April 18.  All tourney action will occur at the Rocky Mount Sports Complex Football Stadium as part of the USA South Spring Festival.