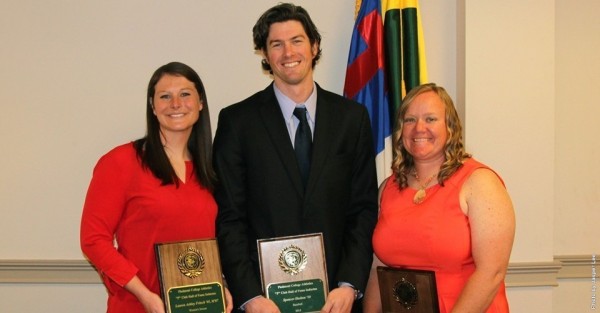 Goza was a four-time All-Conference soccer player for the Lady Lions and a team captain for three years. She broke all pre-existing records for goalkeeping at Piedmont and graduated with high honors with a BA degree in political science in 2005 and an MBA degree in 2007. She served as an assistant coach for the soccer team while earning an MBA degree at Piedmont in 2007.

Shelton was a four-year starting pitcher for the baseball Lions and was the 2007 Great South Athletic Conference  All-Freshman selection and the 2009 Pitcher of the Year.

He was a three-time All-Conference selection and in 2010 signed a professional contract with the Chicago White Sox organization, pitching one year with the Bristol White Sox (now Pirates). He earned a BA degree in business administration in 2010.

Shepard earned GSAC softball All-Conference honors as both an outfielder and a catcher. She was a two-year team captain and named to the National Fastpitch Coaches Association and the NCCAA All-Academic Teams.

Shepard earned BA degrees with honors in business administration and Spanish in 2003 and an MAT degree in education in 2005. She was an NCCAA All-America Honorable Mention in 2003 and served as an assistant softball coach at Piedmont in 2004-05. She has served as head coach of the Truett-McConnell softball team for the past 10 years.