Comet Atlas is plunging towards the sun, and here’s the latest.

Last week I introduced you to Comet C/2019 Y4, AKA Comet Atlas. Atlas was discovered just a few months ago in December and has been a major focus in the astronomy community for the past month or so. Atlas is currently out around the orbit of Mars at a brightness of +7.6 (telescope required).

Initially, Atlas was expected to become a decent comet, but nothing spectacular. Original estimates put it at a naked eye comet at best with a visual magnitude, or brightness, of +2-4. But earlier this month it surprised everyone when out of the blue it began brightening at a quick, almost alarming rate. Atlas quickly surged to be 600 times brighter than it was supposed to be and is now an excellent comet to observe with small telescopes.

The question every astronomy buff such as myself is waiting to see the answer to is: how bright will it get? Based on the brightening trends we have seen in the past month Atlas should easily reach naked-eye brightness and be visible without the need of a telescope or binoculars. This will most likely happen during May when Atlas makes its closest approach to the sun. A model forecast, courtesy of www.aerith.net, of it’s magnitude can be seen below. Lower numbers mean a brighter comet. The black dots are what has been observed.

But…. if you are worried it won’t be all that bright you have a right to be. There is always a chance the brightening we are seeing now could just be an outburst that will eventually fade, or that the comet will burn through all it’s fuel too quickly and burn out before reaching the sun.

Interestingly, Atlas is following a near identical orbit to another great comet, the great comet of 1844. It is not the same comet, but almost certainly came from the same parent body that created the 1844 version. This doesn’t mean anything particular for what we could expect from Atlas, but if it is anything like it’s predecessor we should be in for a good show as we head into late April and early May.

Stay tuned for the latest and watch the skies! 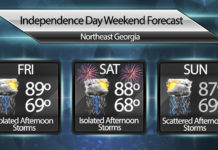 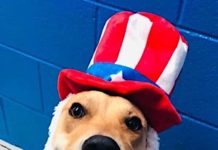 PETrified: Keeping your pets safe on the Fourth of July