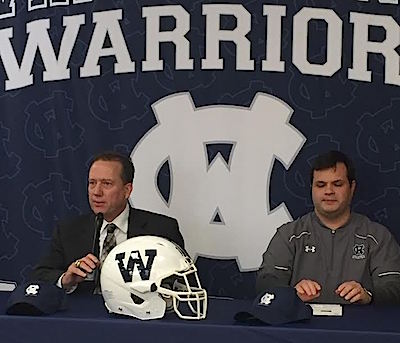 “I’m a passionate 53 year old and I’m looking forward to this. I think the people of White County are not just my kind of people, but I think they are passionate and I think they are hungry for winning football. I really respect the job that has been done to this point, but I’m also ready to get going and get our guys playing.” ~ New White County High head football coach Tim Cokely

Tim Cokely made his first public appearance as the Warriors’ new head coach Thursday. He succeeds Coach Bill Ballard who announced in November he was stepping down as head football coach after six years.

Cokely previously served as head coach at Leon High School in Tallassee Florida. Described as one of Florida’s most successful coaches, Coach Cokely has 22 years of high school head coaching experience. During the course of his career he’s compiled an impressive record of 185-73 and collected 6 state championships in Florida.

“Tim Cokely will bring an immediate winning attitude to WCHS, we are excited to have a coach of such caliber with a strong moral character” commented White County High School Principal John Osborne.

White County High School Athletic Director Alan Griffin said, “The entire athletic department will benefit from Coach Cokely, he brings years of experience and knowledge that will impact every student on campus.”