The political upheaval in Demorest continues. In its first meeting of 2021, the City Council voted to remove two of the city’s top appointed officials and again delayed the purchase of a new firetruck.

Since there was no tie, Mayor Rick Austin did not vote.

The decision to remove Homans comes as no surprise. Hendrix and Davis, along with Demorest City Manager Kim Simonds and the group Concerned Citizens of Demorest, have attempted to get rid of him for the better part of a year. Last year, Hendrix and Simonds hired outside attorneys to try and oust Homans, and the CCD demanded his resignation.

Jim Welborn, who unsuccessfully ran for mayor against Austin three years ago, won a seat on the council in November with support from the CCD.

Mixon’s removal was a bit more surprising, as the council and city manager had not been as overt in their attempts to get rid of her.

Piedmont College did threaten to sue Mixon along with other city officials in a not-so-veiled attempt to get rid of the mayor. Ultimately, the college did sue several city officials, but not Mixon.

Tuesday night’s action leaves the City of Demorest without an attorney and treasurer.

Tensions rose after the vote; some in-person members of the audience began to cast shame on the council in response to Mixon’s removal. “Treating Joely Mixion like that without as much as picking up the phone and calling her, I’m glad that I will not be [part of the council],” Homans said. “Shameful.”

“The level of financial detail that the city council has gotten over the last five years have been extraordinary, and for us to do that to Ms. Mixon, I am beyond words,” Austin said.

The council did vote to reappoint Robin Krockum as Demorest Police Chief. Last year, Simonds abruptly fired Krockum. Hendrix and Davis approved. After they were threatened with a lawsuit, the councilmen later voted to reinstate him.

After fighting back repeated calls from the public last year to resign, Simonds was unanimously reappointed by the council.

In other developments, the Demorest City Council unanimously voted to delay purchasing a new firetruck. The issue has been on the council’s agenda for two months now.

Demorest Fire Chief Ken Ranalli told the council the city needs the firetruck, and the price will continue to rise– it’s already $70,000 over the SPLOST budget.

Davis and Hendrix adamantly oppose the purchase, although it was included in the city’s SPLOST VII proposal they approved last year.

“I won’t vote for buying a fire truck at this moment,” Davis said. “I’m tired of talking about it. We’ve got two walls collapsing; we’ve got issues with the sewer and water lines. We have a lot of issues right now, and [the firetruck is] not on my priority list.”

Austin says the city does not need to delay the firetruck purchase to pay for those projects since they’re already funded. He expects to hear back from the Department of Transportation this week about how much the state will pay to help the city rebuild the collapsing retaining wall on Central Avenue.

Davis says he was told SPLOST funds for the firetruck “could be reallocated.”

This isn’t the first time council members have undermined the city fire department. Last year, Hendrix and Simonds were in talks with county officials about possibly merging the city’s department with Habersham’s. The county pulled out of those talks after public backlash over the proposal.

It’s unclear whether Hendrix’s and Davis’ refusal to follow through on financial support for the fire department now is in any way related to that effort.

Davis and Hendrix were elected in 2018. Before the pandemic, neither participated in the government training classes required by the Georgia Municipal Association. 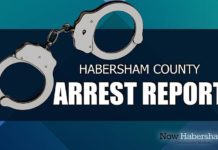