The plan under the newly granted Medicaid waiver is called Pathways, and it would increase eligibility for uninsured single adults with incomes up to 100 percent of poverty, about $12,000 annually. There are strict eligibility rules, called  “qualifying activities,’’ where an individual must fulfill at least one. These include working at least 80 hours a month.

Because of those restrictions, Georgia officials have estimated that about 50,000 people will get coverage through Pathways. Critics, including many Democrats, note that this number is just a fraction of the 500,000 who would get coverage through a standard Medicaid expansion under the federal Affordable Care Act (ACA). Medicaid expansion has been adopted by 38 states but has consistently been rejected by Georgia’s Republican-led government, whose leaders say it would be too costly.

The administrator of the Centers for Medicare and Medicaid Services, Seema Verma, attended the ceremony, praising Georgia’s “market-driven, innovative approach.”

Kemp administration officials say the goal of Pathways is to get a person started with Medicaid coverage, then, as the person’s income increases, to move the person to employer coverage or to an individual policy purchased on the insurance exchange.

The second waiver request is for a plan called Access, which would feature “reinsurance’’ and a new portal for individuals enrolling in coverage for individuals. The feds have completed their review of that plan, and state officials expect it to be approved in the coming days.

Premiums should fall under reinsurance by an average of 10 percent for people seeking individual and family policies, Kemp administration officials say. Reinsurance has been adopted in about a dozen states and has broad support, even from those who generally oppose Kemp’s waiver plans.

The Medicaid waiver approval comes as the COVID-19 pandemic has caused many Georgians to lose jobs and employer health insurance. Two new national studies have estimated that 6 million to 8 million Americans have slipped into poverty in the past few months during the pandemic.

Georgia’s uninsured rate, which at 13 percent is third-highest in the nation, has undoubtedly increased since COVID-19 has gripped the state.

And the U.S. Supreme Court will take up a case next month, supported by Georgia’s attorney general among others, asking that the ACA be overturned. If that were to occur, the Access waiver would die along with the health law, but Georgia officials insist that the Medicaid eligibility changes would continue in any case.

Would expansion be better?

The Medicaid waiver plan is set to begin in July 2021.

The qualifying activity for that coverage include meeting the work threshold, or education, job training, volunteering or other eligibility standards.

The state would pay for a person’s employer-sponsored insurance or enroll the person in Medicaid. The new enrollee will be required to pay a nominal premium, based on a sliding fee scale. 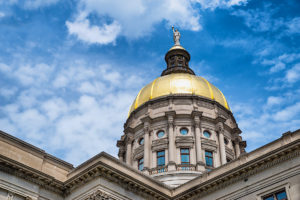 “Georgia Pathways is a ‘hand up’ for hard-working Georgians in our state who are more than deserving,’’ Kemp has said.

Kemp administration officials estimate the cost of the two waivers at $218 million, comparing it to their estimate of $547 million for a full Medicaid expansion.

But the latter figure doesn’t include the savings in state spending that expansion would provide.

Those savings were included in a 2019 fiscal note, requested by Democratic state legislators, that put the cost of Medicaid expansion at $148 million and cover up to 526,000 people in the first year. The estimates for the cost and impact of expansion increase to up to $213 million in fiscal 2022, covering as many as 598,000 people, according to the fiscal note.

Any increase in insurance coverage is a good thing, said Bill Custer, a health insurance expert at Georgia State University. But he adds, “It’s hard to figure this [waiver] as fiscally responsible.’’

“The state is overpaying for the results and underappreciating the potential of Medicaid expansion,’’ Custer said.

Tracking people’s hours of work, Custer added, would be a documentation burden for both the state and the individual.

Federal courts have vacated other states’ waiver plans imposing work requirements, finding that CMS did not show how such policies could be consistent with Medicaid’s objectives. But Kemp administration officials insist that what’s being contemplated here is not a work requirement, but one of a group of qualifying activities.

Laura Harker of the Georgia Budget and Policy Institute, which supports Medicaid expansion, points out that the Georgia waiver will not receive the 90 percent federal match that an expansion would provide. The latter, she said, “would bring billions of new dollars into our health care system at a critical moment.’’

Officials say 53 percent of counties in Georgia have just a single insurer selling policies through the health insurance exchange, which was created by the ACA for people who don’t have job-based or government coverage.

The Kemp administration said that 129,000 Georgians left the exchange from 2016 through 2019. But Custer noted that those years were a period of economic growth, when many people may have obtained job-based insurance. It was also when Congress scrapped the ACA’s tax penalty on people failing to buy health insurance.

The Kemp plan is to market the new program statewide to the uninsured, especially those who qualify for a subsidized exchange plan with no premiums but haven’t signed up for one.

Reinsurance, which would go live in January 2022, aims to stabilize health insurance premiums by capping the cost that insurers incur in covering people with high medical costs.

Those premium reductions from this change may be 5 percent in metro Atlanta, where there is currently more competition among insurers, but 25 percent in markets that have a lone carrier offering coverage.

The more controversial part of this waiver would launch a new platform for people to sign up for insurance coverage.

Healthcare.gov, the current government portal for ACA plans, would be replaced by a system that would allow people to enroll directly with insurers, with local brokers or agents, or through private-sector broker sites.

The current system is “clunky and cumbersome,’’ said Ryan Loke, health care adviser to the governor.

What’s envisioned is a set-up something like the commercial travel site hotels.com. People seeking insurance would be given options beyond ACA-qualified health plans. Georgians would also get information about short-term health plans and catastrophic health plans, which may not have the entire array of benefits that the ACA plans guarantee. These plans may not cover pre-existing health conditions.

Kemp, though, said people with health conditions would be protected. “Junk insurance is not an option.”

Critics worry about the state abandoning the current website. “Separating Georgia from healthcare.gov puts people with pre-existing conditions, rural Georgians, and people of color at unnecessary risk of enrolling in substandard health insurance or becoming uninsured altogether,” said Laura Colbert of the consumer advocacy group Georgians for a Healthy Future.

The switchover from one portal to another would bring ‘‘heavy, heavy IT costs,’’ said Georgia State’s Custer. 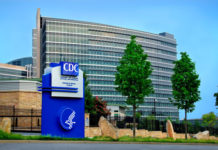 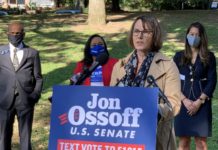 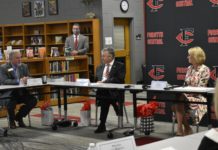 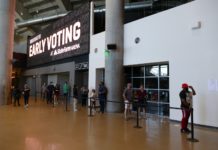 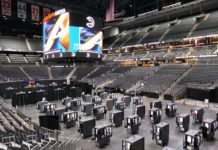 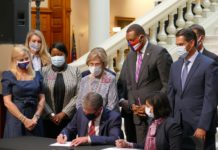