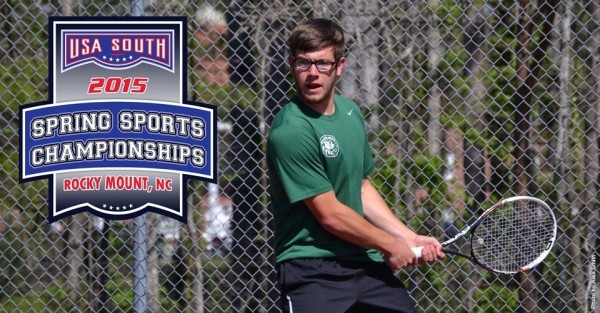 Rocky Mount, NC – The Piedmont College men’s tennis team fell at the hands of the top seed of the USA South Championship Tournament earlier today dropping a 9-0 decision in the semifinals to the Battling Bishops of North Carolina Wesleyan College.

The Lions have been eliminated in the semifinal round of the USA South Championship Tournament by the Battling Bishops in each of the last three seasons since becoming a league member.

For NC Wesleyan, the win helps the program move on to the USA South finals set for tomorrow at 9:00 am as the Battling Bishops look to claim their 7th consecutive conference tournament championship after being picked as the league favorite in the preseason poll.

Piedmont ends the year at 10-8 as the Lions have posted five straight seasons of at least ten wins or more since the return of Head Coach Shane Wood to Burgen Tennis Courts.

The Green and Gold have also finished in the top four of the league standings in every season as a USA South member since joining prior to the 2013 season.