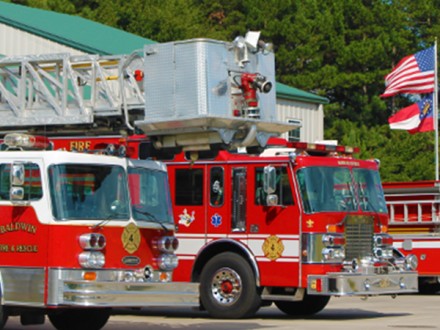 “We’ve been held down for the past seven years,” Fire Chief Joe Roy said. “We’ve been bypassed twice while other [City of Baldwin] departments’ [budgets] have been increased twice.”

Baldwin’s starting pay for a firefighter is a salary of about $25,000. In Cornelia, it’s about $38,000. That $13,000 difference means Baldwin can’t compete– the city received less than five applications for its open firefighter positions over the course of this year.

The city’s fire department has run on a 24/72 schedule for the past three years, meaning firefighters in Baldwin work 24-hour shifts and then take 72 hours off, but Roy wants to change this to a 24/48 schedule (24 hours on, 48 off) to get his staff’s pay up. “My goal as fire chief is to get money in their [firefighter’s] pockets,” Roy said.

On the 24/48 schedule, the firefighter’s hourly pay will remain the same, but because of the increase in hours, their yearly salary will increase to about $33,400. Even if the Baldwin council passes this schedule change, the city is still set to lose two firefighters, making the Baldwin Fire Department short-staffed by five total firefighters.

To bring in more staff to fill those positions, Baldwin will need to have competitive, or at least comparable, pay for their fire department. “How do we get you more money? We have to increase property taxes,” Councilwoman Stephanie Almagno, Ph.D. said. Almagno, who completed her first year on the council Jan. 7, made it clear that she has no plans to jump into tax changes without understanding what that could mean for the citizens of Baldwin.

“I want to make sure our public safety folks and our public works department are paid,” Almagno said. “You are the frontline for our citizens. I feel like going through the budget process, we have to talk about taking care of our public works and public safety. I’m hesitant to do it piecemeal– I’m not saying I won’t do it piecemeal– because I really do want to understand the implications of taking care of our employees for the taxpayers, too.”

Baldwin’s current millage rate is 7.5, which hasn’t changed since 2019.

“I’m grateful that it [property tax] is so low, but [at] what expense?” Councilwoman Alice Venter said.

The City of Baldwin may consider implementing a fire tax as well, which would place an additional tax on commercial buildings based on the building’s structure to fund the fire department.

Baldwin previously brought in revenue from fire service contracts with Banks County and Alto, which the Baldwin City Council voted to end in 2018. “I was a part of that because I was ignorant,” Venter said.

The Baldwin Fire Department’s only other source of revenue is through insurance billing, but according to Roy, the department is lucky to make $3,000 a year from insurance billing. For scale, the cost of the necessary equipment for a new firefighter to start in Baldwin is $4,000.

The city plans to make a decision on how best to help the fire department at their meeting at the end of the month when their city budget is set to be completed. That meeting will take place on Jan. 25 at 6:30 pm.