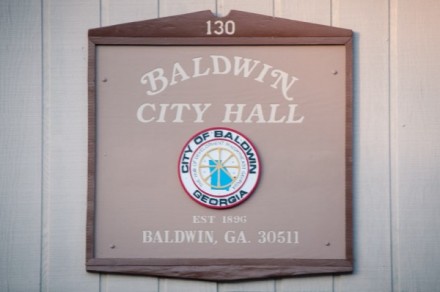 At Monday night’s City Council  meeting, Baldwin Mayor, Jerry Neace, closed the meeting by announcing a big real estate purchase by the City. “I am happy to announce that the City closed on the South State Bank building,” said Neace who went on to say the purchase price for the iconic building on highway 441 was $520,000 plus closing costs. Councilman Jeff Parrish also commented, ” I am very proud that we were able to pay cash for the building. There is no financing on the building.”  Neace remarked that the cash purchase could not have taken place in previous years in Baldwin. The Council and staff have worked very hard to improve the financial situation of the City of Baldwin.

The next step is to ascertain what will be needed to renovate the building to house the City offices. Over the next few weeks, the council expects to have an estimate and a possible timeline in moving the City forward. The building is the former Habersham Bank building which was purchased by South Carolina Bank and Trust when Habershan Bank failed in February of 2011. SCB&T then changed the name of its banking operations to South State Bank.  South State Bank then closed the Baldwin branch office in July of this year. The branch was the only banking option within Baldwin City limits.