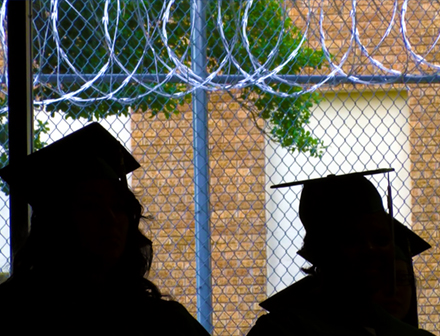 The program brings teachers from the school together with inmates. It was the brainchild of Georgia’s Assistant Commissioner of Inmate Services Buster Evans.

He says earning a diploma improves inmates’ chances of getting into college and gaining employment upon their release.

He also points to studies that show educated inmates have lower recidivism rates.

“We wanted to try it out.” says Evans. “We knew that if we started here and it was a success It would give us the opportunity to know if we would want to expand.”

Evans is a former educator.  Governor Nathan Deal brought him into the Corrections Department to focus on educational initiatives as part of Georgia’s ongoing prison reform efforts. “It exceeded all our expectations,” Evans says. “To see our ladies overcome their pasts to create a new future, for me, is one of the greatest experiences of my professional career.”

Graduate Jasmiyah Whitehead personifies Evans vision. Now 21, she’s been behind bars since she was 16 years old.

She and her twin sister were arrested and charged in connection to the death of their mother in 2010. Last year, Jasmiyah entered a guilty plea to a charge of voluntary manslaughter. She’s now serving a 30 year sentence.

When the prison high school program started, organizers targeted her for the first class. They could see in her the potential and a drive to succeed. She was hesitant at first. “When I was sentenced, I thought, even if I do get out, I’m already past the point of high school age.”

She’d already gotten her GED earlier in her incarceration but educators convinced her that a diploma would take her further. “We all know, when you got to college, a high school diploma is so much better than a GED.”

Thursday, Jasmiyah stood before her classmates as the Valedictorian of the class of 2015.

Her official file with the Corrections Department lists the year 2040 as her “Max Possible Release Date” and she’s already planning on putting the years ahead to good use furthering her education behind bars.

Right now, Jasmiyah works as a teacher’s aid for the next class of prison high school students at Lee Arrendale. Buster Evans says the state will start a similar program for male inmates next month at Burruss Correctional Training Center in Monroe.

Habersham Rotary Club recognizes students for their service and achievements