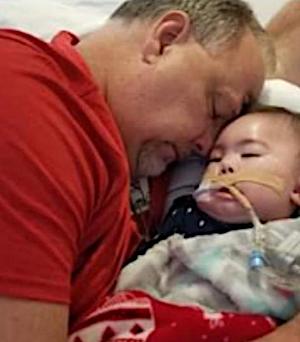 Darryl Macy snuggles up to his grandson, Colby. The 23-month-old has been in and out of hospitals since he was born. He’s now back in intensive care.

A South Georgia couple passing through Habersham County got an unexpected gift after a chance encounter with a stranger at a convenience store.

Darryl and Shawna Macy weren’t even supposed to be in Habersham on Thursday (Jan. 23); they were in White County on their way home to Warner Robins when they took a wrong turn.

After realizing their mistake, the couple pulled into a store just inside the Habersham County line. They stopped to ask for directions and get some drinks. While at the counter, Darryl struck up a conversation with the clerk. He told him where they had been and where they were going. He also spoke of his young grandson, Colby, who’s in intensive care at Egelston Children’s Hospital in Atlanta.

“My grandson’s been in the hospital, and my daughter and her husband are having it rough,” Macy recalls telling the clerk.

It seems someone else overheard him.

A peacock and generous stranger

Macy noticed the man because he was the only other customer in the store. He was wearing blue jeans and a t-shirt, but no coat. “He looked like he’d been outside working,” the South Georgia retiree says.

The couple noticed something else – a peacock in the back seat of the truck they assume belonged to the man. It was an unusual sight. When they passed by it on their way into the store, “we giggled,” he says.

When the Macys returned to their car several minutes later, the truck with the peacock was gone. They found an envelope tucked under their windshield wiper. Thinking it was a flyer, Darryl Macy picked it up to throw it away. “It was thick,” he says. “That’s why I didn’t toss it.”

The envelope was addressed to Norton Mountain Insurance in Cleveland. On the outside was a handwritten note that read, “God Bless You. 2 Your Family. All Gifts Come from God.” On the inside was a handful of crisp fifty and hundred dollar bills.

“My wife started counting and got to 23 and stopped,” Macy says. By the time she finished counting the money a third time, the couple realized they’d been gifted $2,500.

Choking back tears, Macy says his first thought was, “Thank you, Jesus!”

A devout Christian, Macy says his family leans on their faith to get them through life:  They’ve leaned on it a lot these past two years.

In 2018, Colby was born prematurely. Diagnosed with bronchopulmonary dysplasia and cystic fibrosis, he’s been in and out of hospitals his entire life. The toddler’s tied to an oxygen tank and has some mental deficiencies due to a lack of oxygen at birth. He’ll turn two on February 4. His mom, Jena Johnson, says, “It’s been tough. I quit my job, but we have God on our side.”

The Johnsons were $2,479 short on their insurance payments. The gift from the generous stranger in northeast Georgia will cover that. “God knew it,” Johnson says. “I just had to praise him.”

While he stops short of calling it a miracle, Macy, too, sees evidence of divine intervention. “It’s not every day that somebody just walks up out of the blue and does something like this.”

He says his grandson’s medical crisis “has really tried our faith” but adds, “every once and a while God drops that little cookie that says, ‘I know you’re struggling and I’m going to make it a little easier on you.'”

Both Johnson and her dad say it took faith for that man to give them the money. And although they don’t know his name, they believe they know his heart.

“Thanks for being obedient,” Johson says. Macy adds, “Love is not an emotion; love is an action. I saw it in action today.” 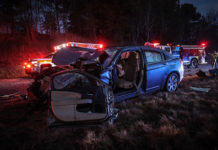